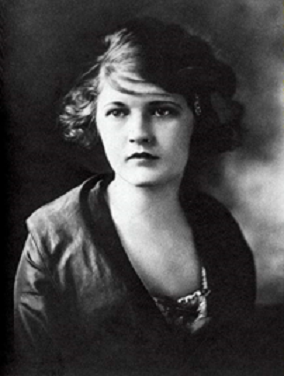 “I don’t want to live. I want to love first, and live incidentally.” – Zelda Fitzgerald

On July 24, 1900, the woman would become known as the eccentric wife of F. Scott Fitzgerald was born. Zelda Sayre grew up in Montgomery, AL and was part of the affluent southern society. This factor was a key element in her life and, because of it, she almost declined F. Scott Fitzgerald’s proposal for marriage. As she saw it, he lacked earning potential. In fact, Zelda only agreed to marry him after the publication of This Side of Paradise. Prior to their marriage, Zelda was never the domestic type of woman—a fact about her that would never change. The married couple hired a nurse to assist in raising their daughter, and employed a house keeper, as well.

Zelda was quite the eccentric in their 1920’s circle. Famous for her outspoken personality, which led many people to dub her as crazy, Zelda Fitzgerald actually aspired to be a ballerina. And while she waited for that dream to come to fruition, she wrote magazine articles and short stories. A popular belief during that time was that she suffered from symptoms of schizophrenia. With today’s psychological knowledge, however, many think she had symptoms of bipolar disorder. Either way, Zelda and all of her eccentricity was often the inspiration for her husband’s female characters – F. Scott Fitzgerald even went so far as to use sections of her diary in his novels, particularly in Tender Is The Night.

In April of 1924, the couple moved to Paris after their play, The Vegetable, failed to gain any attention or good reviews. By 1930, their marriage had turned very rocky, which became one of the factors that led to Zelda’s stay at Sheppard Pratt sanatorium in Maryland. Her husband continued to write novels inspired by their explosive relationship, publishing Tender Is The Night during this time. Zelda, too, wrote and she published her autobiography, Save me the Waltz, during these years—an act of which infuriated her husband. By 1936 Zelda was admitted to the Highland Mental Hospital in North Carolina. In this mental institution, Zelda took up painting.

In December of 1940, F. Scott Fitzgerald died in Hollywood. Zelda attended the funeral, and sent her husband’s last, unfinished manuscript to their publishing company. She then began to work on another novel of her own, Caesar’s Things. This novel remained unfinished.

Zelda Fitzgerald died on the evening of March 10, 1948. A fire began in the facility’s kitchens and spread to the rest of the building. Zelda was locked in her room, awaiting electro-shock therapy, and could not escape.

Forty-four years after her death, Zelda Fitzgerald was inducted into the Alabama Women’s Hall of Fame in 1992.