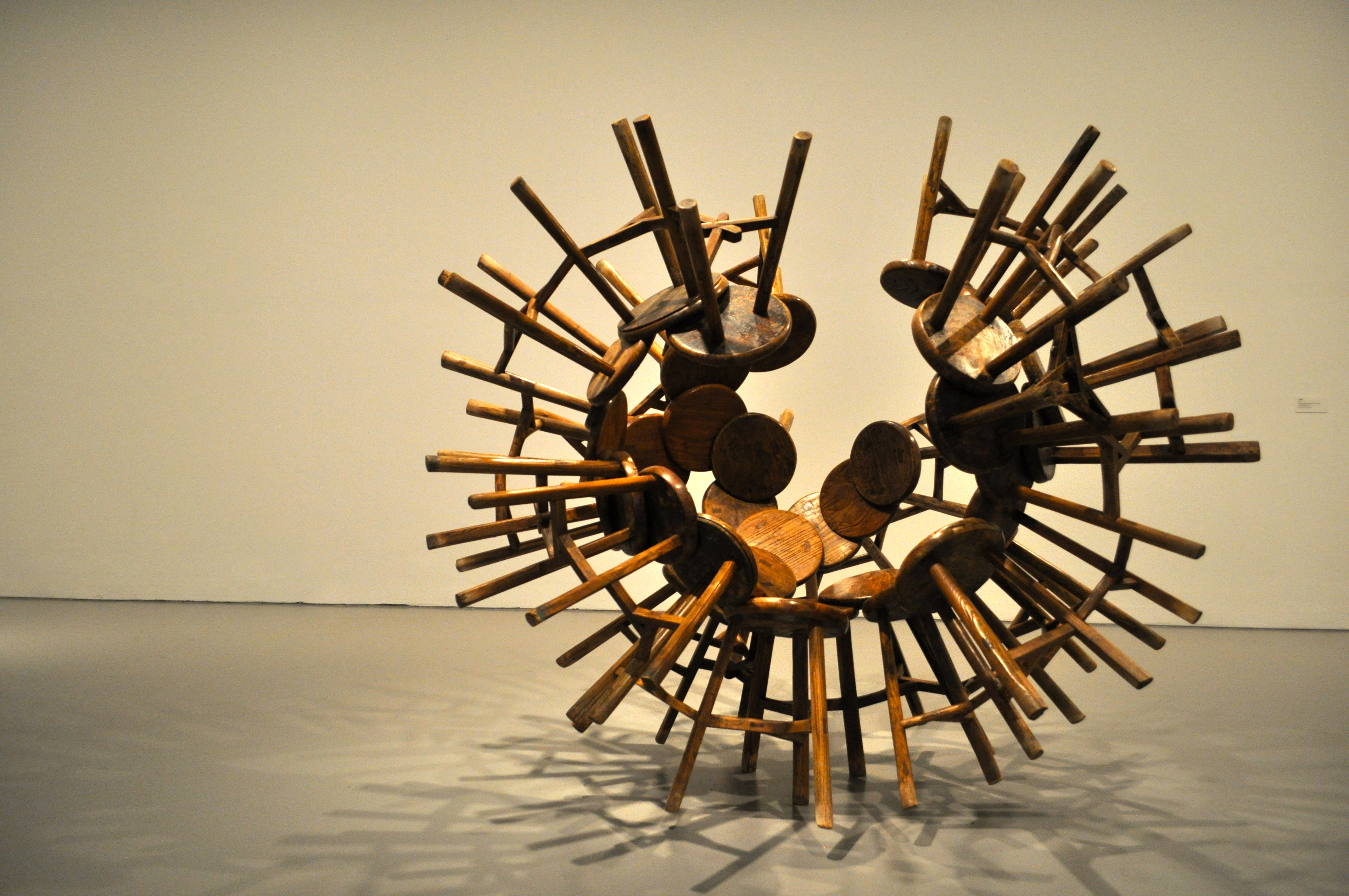 One experiences an immediate sense of diversity and personality when stepping into Ai Weiwei’s “According to What?” The massive multimedia exhibit spreads itself through the Smithsonian’s Hirshhorn Museum (Washington, DC), a multi-floored, circular building, where art and artists intersperse. The circular structure of the museum encourages viewers to walk the floors endlessly, from one exhibition to another and through again. In Ai’s case, it is impossible to know in what order the artist wanted you to perceive his pieces or, rather, it means that there is no order in which he wants you to perceive his pieces. And still, there is clarity in the seeming chaos.

Among the first installations is “Beijing’s 2008 Olympic Stadium” paired with “Divina Proportione” and “F Size” in which the floor and walls of a curved space are papered with images chronicling, in no obvious order, the building of the Beijing Olympic stadium. The completed stadium shown exactly three times backdrops two spherical, wooden sculptures, one the height of an average woman and one of a 10-year old child: hollow, rounded forms made up of joined hexagons and pentagons, geometrically similar to soccer balls but indescribably more elegant, due in large part to the gorgeous, polished, and very expensive Huali wood. The sculptures reflect an earthy geometry juxtaposed to photographs of industrial, construction geometry in steel and glass. The sculptures and photographs hint that changing aesthetics, over time, may not be so very changed. Indeed, many of Ai’s pieces bring together the very old and the new, highlighting the change not only in what we perceive as exceptional but also highlighting the change in what we perceive as art. His largest installation, “Circle of Animals: Zodiac Heads,” twelve giant animal and mythological heads—i.e. dragon, dog, sheep—made of bronze and perched on ten-foot high ornate poles encircle a fountain outside the museum. They are hard to miss, visible from every floor of the building. The sculptures are a re-envisioning of the heads that once functioned as a part of a Chinese water clock in the eighteenth-century.

Ai makes use of all kinds of media in his work: wood, steel, paint, ceramics, porcelain, photography, sound, glass, even tea leaves. His more minimalist works are in wood often taken from ancient temples and buildings and sculpted into modern or novel shapes, though he works often in often in multimedia and mixed media. What is most consistent about his work is its controversy. A series of three black-and-white photographs show him dropping a 2,000 year-old Han Dynasty urn, the third photo capturing the urn smashing to pieces on the floor. In front of these images, a set of sixteen similar Han Dynasty vases are displayed, painted over in bright hues of industrial paint. He does similar things with pieces of antique Chinese furniture, taking them apart and re-forming them so that they are unrecognizable or unusable. At first, you can’t help but gasp, and then cringe: There is something sacrilegious about destroying what is ancient and cultural and preserved. But it does force you to think. Is something worth admiring simply because it is ancient and cultural and preserved? Taking what was once admired and infusing it with new life can almost be seen as displaying something like reverence for the original or paying homage—if you can get past the initial desecration. There are, however, pieces that seem irreverent just for irreverence’s sake: a Neolithic-age vase with a silver Coca-Cola logo painted over it, a photo of a hand flipping off the White House, next to a photo of the same hand flipping off Tiananmen Square. A number of Ai’s pieces deal with the deaths of schoolchildren during the 2008 Sichuan earthquake, and these are the most affecting installations in the exhibit. In one of the simpler, but more haunting of these, a length of wall is covered in the names of students who perished in collapsed schoolhouses during earthquakes, and the names are read aloud on a recording by various voices of men, women, children. There is something eerie about hearing the voices of the dead read to you in a foreign language, static in the background, almost as if the speakers are reciting something you should already know. Another installation related to the earthquake and its ensuing deaths, “Wenchuan Steel Rebar,” is quite simple, but the most personally affecting piece in the exhibit. It is hundreds of rusty poles, the kind you might find at an open construction site, beautifully arranged side by side, in waves. From a distance or at a glance, they resemble wood, or bamboo poles. Their arrangement brings to mind nature and music in a way that steel bars just shouldn’t. It turns out the rusty bars are taken from the rubble of the collapsed schoolhouses during the Sichuan earthquake, and this knowledge brings a new, disquieting tone to them. There is a lyricality to the piece that is disquieting, perhaps because of its origins. I gave myself two weeks and visited the exhibit again, to see if it still resonated or if the feelings it stirred were, perhaps, due to something I’d eaten that day, and indeed, it did resonate a second time. The exhibit as a whole maintained its personal resonance, and the steel rebar piece, specifically, retained its seemingly incongruous agrarian spirit.

Ai Weiwei’s exhibit, overall, leaves the viewer with a sense of society and change and an artist seeking to affect change and the recognition of change in its positive and negative forms. Ai is a man who is clear on who he is and why he is doing what he is doing. Experiencing Ai is an exercise in meeting this standard of clarity. And it leaves the viewer asking him or herself, what is my clarity? How does my clarity affect change in my society?

Tomiko Breland was born and raised in Monterey, California. She received her BA in English from Stanford University and her MA in writing from Johns Hopkins University. Tomiko is an editor at TESOL International Association in Alexandria, Virginia, and she enjoys writing about people who are trying to figure out who they are—which, she thinks, is just about everybody.