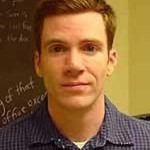 One Reply to “A Little Life | Recommended by Michael Nye”